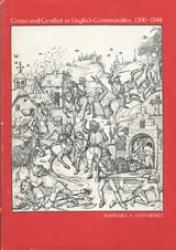 Hard back (slidt smudsomslag). Bogen er på 360 sider, hvoraf side 1-18 er indstreget med blyant. About This Book: As this account of crime patterns in medieval England shows, crime can perhaps tell us more about a society’s dynamics, tensions, and values than any other single social phenomenon. And Barbara Hanawalt’s approach is particularly enlightening because it looks at the subject not from the heights of the era’s learned opinion, but from the viewpoint of the people participating in the criminal dramas and manipulating the law for their own benefit. Hanawalt’s sources are those of the new social historian—village and judicial records supplemented by the literature of the time. She examined approximately 20,000 criminal court cases as well as coroners’ and manorial court rolls. Her analysis of these data produces striking results. Medieval England, the author reveals, was a society in which all classes readily sought violent solutions to conflicts. The tensions of village life were severe. The struggle for food and for profits caused numerous homicides and property crimes. These felonies were committed in seasonal patterns, with homicides occurring most frequently during the difficult times of planting and harvesting, and burglaries reaching a peak in winter when goods were stored in houses and barns. Moreover, organized crime was widespread and varied. It ranged from simple associations of local people to professional bands led by members of the nobility. One of Hanawalt’s most interesting findings explodes the Robin Hood myth of robbers who stole from the rich and gave to the poor. Almost always, she shows, the robbers stole from the poor and kept for themselves. Throughout, Hanawalt carefully places the crimes and their participants within the context of village life in the later middle ages. Along with a description of the social and legal setting of criminal acts, she includes a discussion of the influence of war, politics, and economic, social, and demographic changes on the patterns of crime. Table of Contents Frontmatter (page N/A) 1. Introduction (page 1) 2. The Social and Judicial Context of Fourteenth-Century Crime (page 19) 3. The Crimes: Definitions, Patterns, and Techniques (page 64) 4. The Suspects (page 114) 5. The Relationship Between the Victim and the Accused (page 151) 6. Criminal Associations and Professional Crime (page 184) 7. External Influences on the Pattern of Crime (page 222) 8. The Impact of Crime on Fourteent