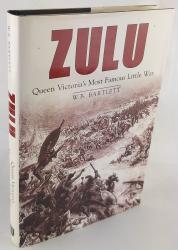 The Zulu War grabs attention in a way that no other of Queen Victoria's "Little Wars" does. It is a story rich in the extremes of human experience: gallantry, cowardice, savagery, hubris, and sheer, stark terror amongst others. The way the campaign unfolded was a consequence of the actions of Britain's commander in the field, Lord Chelmsford, who thought that the outcome would be a foregone conclusion, but then found himself faced with one of the most shocking disasters in British military history. This book looks at events through Chelmsford's eyes, examining contemporary correspondence to tell the tale. Forced to cope with the catastrophe of Isandlwana, only slightly offset by the heroic defense of Rorke's Drift, he then had to win the war as quickly as possible, before the man who had been chosen to replace him arrived in South Africa. Full of drama, this is the story of Lord Chelmsford's war, one of the most turbulent campaigns ever fought in Africa. 288 pages. Illustrated, hard cover, fine with dust jacket