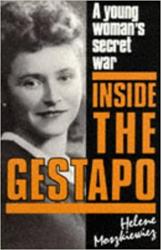 189 sider. Orig. Paperback. --- Helene Moszkiewiez (December 20, 1920 – June 18, 1998) worked within the Belgian Resistance during World War II, and maintained three identities, Jewish, Belgian and German, working for two years as a clerk in Gestapo headquarters in Brussels. The Germans took control of Belgium when she was 19. Two years earlier she had met a young Belgian soldier in a Brussels library. When she met him again, and he was operating with a different name while wearing a German uniform, she accepted his offer to work within the Belgian Resistance to undermine the Nazis. Moszkiewiez moved to Canada after the war and wrote her memoirs, Inside the Gestapo: A Jewish Woman's Secret War (Macmillan, 1985). Her story recalls false identity papers, helping POWs escape, working within the Gestapo, hearing screams of SS victims, stealing information to rescue Jews scheduled for transport and killing a Gestapo officer. The story was made into a 1991 TV film, A Woman at War, with Martha Plimpton in the lead role. Her story also inspired Paul Verhoeven for the movie Zwartboek (Black Book). ### After the invasion of Nazi Germany, Helene, a young Jewish woman, risked her life to participate in the resistance disguised as a secretary in the office headquarters of the Gestapo. This book details some of her experiences there, and also testifies to some of the horrific times her fellow citizens had to endure.. ### Recounts the experiences of Helene Moszkiewicz, a Jewish girl who worked for the Belgian underground movement against the occupying Nazis, including her infiltration of the Brussels Gestapo headquarters, hiding British airmen, and assination of a senior Gestapo officer in a public park. "Inside the Gestapo" is an inspiring, true-life war thriller. It is also the unforgettable story of one woman's will to survive against all odds. Pænt eksemplar. (Saml.HRN).