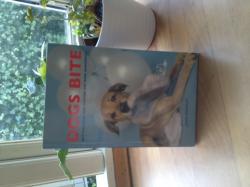 Dogs Bite - but balloons and slippers are more dangerous

Dogs are dangerous. And they are more dangerous to children than to adults. Not as dangerous of course, as kitchen utensils, drapery cords, five-gallon water buckets, horses, or cows. Not nearly as dangerous as playground equipment, swimming pools, skateboards, or bikes. And not remotely as dangerous as family, friends, guns, or cars. Here’s the reality. Dogs almost never kill people. A child is more likely to die choking on a marble or a balloon, and an adult is more likely to die in a bedroom slipper related accident. Your chances of being killed by a dog are roughly one in 18 million. You are twice as likely to win a super lotto jackpot on a single ticket than be killed by a dog. You are five times as likely to be killed by a bolt of lightning than be killed by a dog. Because it is so extraordinary, lightning is often regarded as a universal cliché for an Act of God. Dog-attack deaths are even more extraordinary—five times more extraordinary. The supposed epidemic numbers of dog bites splashed across the media are absurdly inflated by dubious research and by counting bites that don’t actually hurt anyone. Even when dogs do injure people, the vast majority of injuries are at the Band-Aid level. Dogs enhance the lives of millions more people than even the most inflated estimates of dog-bite victims. Search-and-rescue and cancer-detecting dogs save significant numbers of human lives, and assistance dogs enormously improve the quality of many more. Infants who live with dogs have fewer allergies. People with dogs have less cardiovascular disease, better heart attack survival, and fewer backaches, headaches, and flu symptoms. Petting your dog lowers stress and people who live with dogs just plain feel better than people who don’t. Yet lawmakers, litigators, and insurers press for less dog ownership. This must stop. We must maintain perspective. Yes, dogs bite. But even party balloons and bedroom slippers are more dangerous. “A tour-de-force examination of dog bites. Among other persuasive appeals for sanity, Janis Bradley has outed “lumping”: the erroneous connection between kitchen-injury level bites and maiming or fatal dog attacks. She dares to be rational. Her rationality will—hopefully—raise the level of discussion in a topic mired in hysteria. Why do we get so excited about this particular class of injury? Enter the irrational. Human brains are organs that evolved for a single over-arching purpose: to maximize the representation of genes possessed by a